Hôtel Oui Go! is more than a hotel!We dared to dream of an authentic space to offer you a unique service.

The heritage value of the Balcer Building comes from its legacy as a landmark in downtown Trois-Rivières. This section of Notre-Dame Street has a long history of commerce. Since the foundation of the city in the 17th century, the area has been a natural hub for financial activities because of its location near the river, which was a channel for the transportation of goods.

Starting in the mid-19th century, the timber industry grew rapidly and the business district came alive. Several shops of all kinds sprang up on Forges Boulevard and Notre-Dame. In June 1908, a great fire ravaged the city and its buildings. The district had to undergo almost total reconstruction in the following months. The Balcer Building was constructed shortly after the fire, between 1908 and 1910.

The Balcer Fur Store was founded by Eugène Balcer in Trois-Rivières in 1854. As early as 1915, tram lines were constructed on Notre-Dame, and traffic in the district increased even more. The Bank of Montreal acquired the Balcer Building in 1925 and renovated it in 1931. While the building has had several occupants over the years, it has retained its original mixed use.

Today, the building is home to a hotel and remains a witness to the lively downtown area.

The Balcer Building’s heritage value also stems from its architectural identity. The building’s noble character is expressed through its refined ornaments borrowed from classical architecture vocabulary. The building is a throwback to historical styles, which had a resurgence of interest in the second half of the 19th century.

References to the styles of the European built landscape, such as buildings from the Italian Renaissance, became popular at the time and were incorporated into the preferred style of merchants, industrialists and banks because the sophisticated decorations lent an air of prestige to buildings. 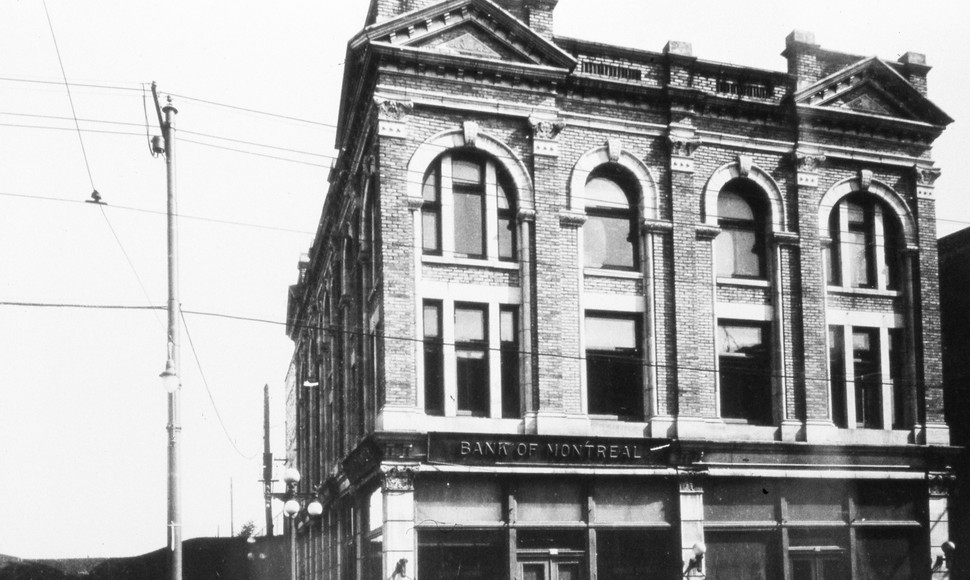 The Balcer Building was designed by the architects Daoust and Lafond, who were very active after the great fire. Their neo-Renaissance style combined brick and stone, arched tripartite windows, pilasters, pediments and a wide cornice.

All these details give the facades an almost theatrical feel and are reminiscent of nearby buildings on Notre-Dame Street. Indeed, many neighbouring buildings were designed in the same style, and even by the same architects, which gives a consistent feel to the built landscape in the area. Today, the Balcer Building still has its original components and has retained its architectural authenticity.